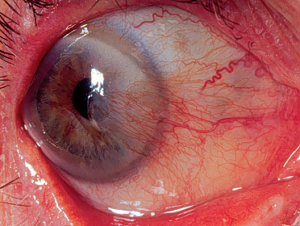 Pterygium is a fleshy growth of abnormal conjunctival tissue (the clear, vascular covering of the sclera – the white of the eye) on to the surface of the cornea (the clear window of the front of the eye). It is a chronic degenerative disorder affecting the surface of the eye that is thought to be due to the transformation of cells at the edge of the cornea by exposure to ultraviolet light and chronic irritation from wind, dust or sand.

The name comes from the Greek word for wing, describing its roughly triangular shape. Most often they grow on the inner side of the cornea but may be on the outer side or both. It needs to be distinguished from the more common pinguecula, which is a similar degenerative lesion that occurs on the inner and outer conjunctiva but that does not grow onto the cornea.

Pterygia are frequently bilateral but may be more extensive in one eye than the other. The lesions tend to grow slowly further onto the cornea but may stop at any stage.  They are more likely to grow in younger people and those with continued exposure to uv light or ocular irritants.

Problems associated with pterygia include irritation and redness, disturbance of vision, as well as cosmetic concerns.

Vision may be affected by the growth distorting the surface of the cornea and inducing irregular astigmatism or, in very advanced lesions, by directly interfering with vision. Large or recurrent pterygia may interfere with movement of the eye and cause double vision when looking to the side.

Treatment of pterygia starts with reducing exposure to the factors causing them – that is at least by wearing sunglasses and a hat outdoors.

Lubricating or mild astringent eyedrops can help keep the eye comfortable. It is best to use those with no preservatives (in single-use containers – Optive Fusion, Systane Hydration,TheraTears, BionTears, Refresh, or special bottles – HyloFresh, HyloForte) or with “disappearing” preservatives (Optive Fusion, Genteal, Vistil). Preservatives in eyedrops can be toxic to the surface of the eye when used for prolonged periods. Thicker drops (Refresh Liquigel, Genteal Gel, Viscotears SDU, Polygel) last for longer but tend to make vision blurrier for longer and are most helpful at night. Many people prefer one drop or another for no specific reason other than the way they feel. Drops that whiten the eye (Naphcon, Albalon, Visine, Optrex, Antistine-Privine, Prefrin, Zincfrin) should only be used intermittently as they will make the eye chronically red and uncomfortable with continued use.

Other than the use of ocular protection and eyedrops the only other option is surgery.

Surgery for pterygium involves removal of the lesion (by dissection with a blade, laser is not used for this), as a day case or overnight-stay procedure in an operating theatre. This is most frequently done under local anaesthetic with some sedation but a general anaesthetic may be necessary for some people.

Other measures need to be taken to prevent the pterygium from growing back, which occurs in many cases if the excision site is left bare. Most commonly this involves placing a flap or graft of conjunctiva (conjunctival autograft) over the site where the pterygium was. The graft is fixed into place with glue or sutures, or both. 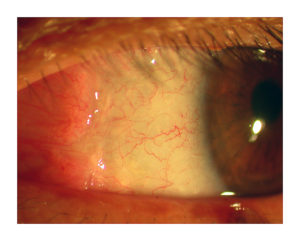 Problems associated with surgery for pterygia

There are potential problems with surgery for pterygium:

The surgery causes variable pain, discomfort and light sensitivity as well as blurring of vision.

Most people will need 1-2 weeks off work after the surgery and some will need longer.

The conjunctival graft will be very red and swollen in the first few weeks and it will take several months for it to be as smooth and white as it is going to be.

There may be a change in focus of the eye. This is usually for the better so that vision is better without glasses or with thinner lenses but rarely vision without glasses may be worse. Glasses will probably need to be changed after 2 months post surgery.

Care needs to be taken in the decision to remove pterygia for symptoms of ocular irritation. Pterygia frequently coexist with more generalised chronic blepharitis and conjunctivitis, which are caused by chronic exposure to the same environmental agents that cause pterygia. In this circumstance removing the pterygium may not cure all of the symptoms.

Pterygia can grow back again. Published results for removal with a conjunctival autograft give recurrence rates of about 5 per cent, but these are operator-dependent and if care is taken may be much lower than this (less than 1 per cent in my practice).

Recurrence of pterygia after surgery may happen in different ways. There may just be a “technical” recurrence, which is evident to the surgeon as some conjunctival blood vessels present on the cornea and may not worry the patient. In some cases, though, the recurrence may be worse than the original lesion. This tends to occur more frequently in younger patients, where the primary lesion is very thick and fleshy, or where the circumstances causing the pterygium continue afterward.

Recurrent pterygia can be removed again if necessary. The choice of management would depend on what was done initially. The surgery is usually more difficult as there is more scarring and it takes longer to heal.

Mitomycin C (a drug that prevents cell proliferation) can be used as an adjunctive agent to help prevent recurrence but there is a small risk of scleral or corneal ulceration with its use and that may require further surgery.

It is important to realise that many pterygia will not cause any trouble in the long run and surgery is not required for these.